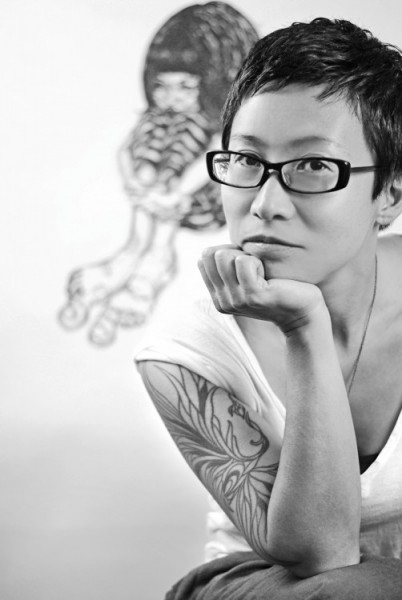 Hiromi Mizugai Moneyhun is a papercut artist. She was born and raised in Kyoto, Japan, the capital city for close to a thousand years before Tokyo. She moved to Jacksonville, Florida, in 2004. Hiromi has been written of in every major publication in the Jacksonville area, including the city’s largest newspaper, the Florida Times Union. She has been featured in Huffington Post and was the subject of one episode of a syndicated Japanese television show. Her work has appeared numerous times throughout Florida in group and solo shows, in New York City, London, and most significantly in Bentonville, Arkansas, in the Crystal Bridges Museum of American Art’s 2014-15 show, State of the Art: Discovering American Art Now. Hiromi began drawing at a young age, and by her teen years had developed a style of her own. With no formal art training, she has evolved a unique, homegrown artistic voice that combines traditional Japanese visual art forms with the super-modernity that is now found in all of Japan’s biggest cities. Hiromi’s three-dimensional cut paper pieces are the result of a multistep process that generates an art that is at once amusingly lighthearted and startlingly alive. Her pieces invite the viewer in; indeed, one feels compelled to reach out and touch the images. Like the works of all the great masters, Hiromi’s pieces are best appreciated when viewed in person